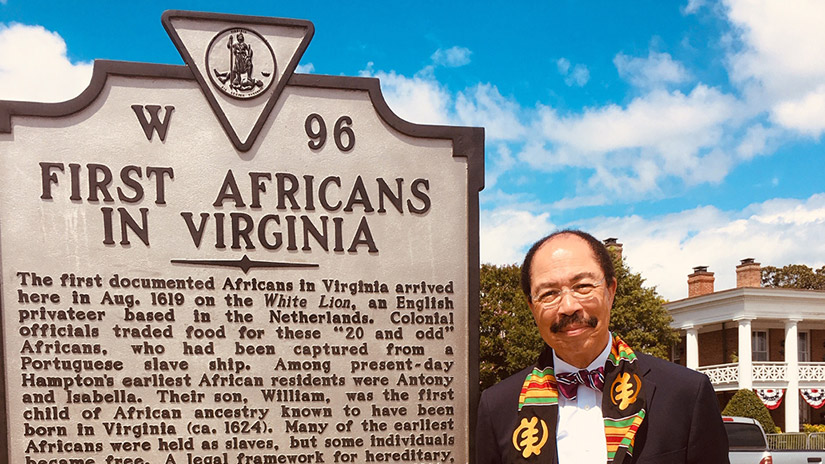 “This was the first time Virginia has paid homage to the first Africans that arrived in this country,” said George Martin, managing partner of McGuireWoods’ Richmond office. “They had always been a footnote, but here they got the level of recognition they deserved for the impact they had on America.”

The event was hosted by American Evolution, an organization “designed to inspire engagement in the themes of democracy, diversity and opportunity” by exploring significant events that took place in Virginia in 1619. McGuireWoods sponsored the three-day event.

Martin and Frank Atkinson, McGuireWoods partner and McGuireWoods Consulting senior advisor in Richmond, serve on American Evolution’s Executive Committee for the Commemoration. This committee was tasked with planning the historic weekend, which was four years in the making. Martin also serves on the 400 Years of African-American History Commission, which was created by federal legislation to plan, develop and carry out programs and activities across the United States commemorating the 400th anniversary of the arrival of the first enslaved Africans in the English colonies.

“The whole team should be very proud of the fact that we are telling a much more complete, accurate and rich story than has been told before,” said Atkinson, “and in the process are helping to bring unity out of diversity, which makes it all worth the work.”

Richmond partner Jackie Stone, co-chair of American Evolution’s First Africans to English North America Committee, read an original poem — “1619 Jamestown (but not only) An Answer to the New York Times” — written for the occasion by renowned American poet and activist Nikki Giovanni.

In his remarks, Jones said, “I’m a ninth-generation American, and I’m the first person in my family who was born with all of my rights recognized by this government.” His parents were born under segregation, he said.

“I was moved because that’s true for me as well; I went to a segregated school until middle school,” said Martin. “The resounding theme of the event was that we need to tell the truth about our history. We need to acknowledge rather than sugarcoat. Almost every speaker acknowledged that slavery was the original sin of this country. Even today, we’re still struggling with the effects of that history, trying to right a wrong. This event also gave us the chance to do just that, while honoring the immeasurable contributions that African Americans have made in building this country.”