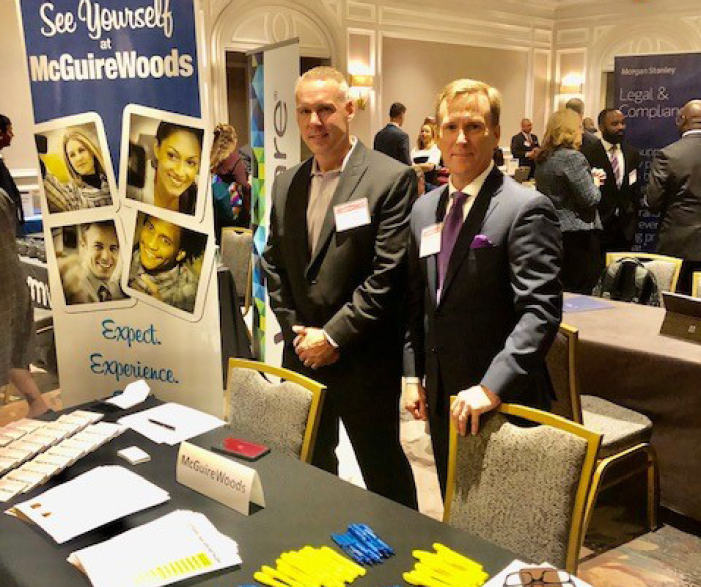 McGuireWoods was a silver sponsor of the Fifth Annual Veterans’ Legal Career Fair, which took place on Oct. 25 in Washington, D.C. Launched in 2015, VLCF is the only legal career fair devoted exclusively to veterans, active-duty service members and military spouses.

VLCF has helped more than 500 active service members and veterans connect with top legal employers. More than 40 employers from across the United States — including McGuireWoods, corporate legal departments and government agencies — participate each year. Veterans, lawyers transitioning out of military service and their spouses traveled from all over the United States and international military bases to attend the career fair, including from as far away as Germany and Uganda. One candidate called it “a once in a lifetime opportunity.”

Washington, D.C., partner John Thompson and Tysons partner Mark Shaffer represented the firm at the career fair. Thompson — chair of McGuireWoods’ Veteran Lawyers Network — served as a captain and helicopter pilot in the U.S. Army, commanding a company of 275 soldiers stationed at Fort Eustis, Virginia, and leading an air cavalry platoon of the 24th Infantry Division based in Fort Stewart, Georgia. Shaffer served on active duty in the U.S. Marine Corps as an infantry platoon sergeant and infantry platoon commander in Iraq and he continues to serve with the U.S. Marine Corps Reserves.